AGM on 24th November at 8pm 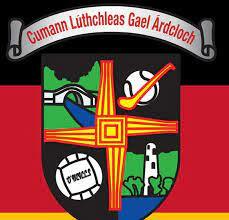 Download our mobile app to hear more about Ardclough.

The Annual General Meeting of Ardclough GAA Club will take place on Thursday, 24th November 2022 commencing at 8.00pm in the clubhouse. The Meeting is open to fully paid-up members of the Club.

In line with the club constitution, only those members who were fully paid up on 31st March 2022 are entitled to vote at the meeting.

Any proposed motions or amendments to the constitution must be received in writing** by the Club Secretary no later than Thursday 10th November. Nominations are invited for the Executive Committee. The following positions will be filled on the night

plus FIVE Other Members

- Nominations must be received in writing** by the Club Secretary no later than Thursday 10th November.

- Any full member who was fully paid-up by 31st March is entitled to be nominated for or elected to any elective office.

- Nominations to serve on the Executive Committee shall be by any two Full Members (which may include the nominee) whose membership fees were paid in full by 31st March.

- Members are requested to confirm that your nominee is willing to allow their name to go forward for a position before proposing them and preferably ask them to be the seconder on the nomination paper. If you are nominating
them via email, please cc them on the email.

The outgoing Executive Committee will nominate candidates for the positions of Children’s Officer, Coaching Officer, Player’s Representative and Irish Language and Culture Officer.

** Motions or nominations may be placed in a box in the club or emailed to secretary.ardclough.kildare@gaa.ie. Proposal forms can be found using the links below, on the club website or behind the bar in the club

Gary Lawlor is coming to the clubhouse!!!

The latest GAA Newsletter can be found here https://www....

Our End of Season Christmas Party is coming soon!!

AGM Reports, Nominations and Motions are on the website now

Invitation for Nominations for Football and Hurling Commi...

Invitations are invited for people to join the Hurling an...

Get live information for Club on the ClubZap App